A few years ago someone on Wayne's Words posted a solution for getting rid of spiders. If I remember correctly they sprayed the overhead cover in the covered slips and the houseboat with some kind of detergent and it helped keep the spiders off. They are pretty bad down there this year so if anyone remembers the remedy please let us know.

Gas, and a match.

Staff member
There have been a few home brew remedies. I find Ortho's Home Defense to be effective and easy to use - and I don't have to mix it myself. Good luck!
S

Thanks Bart we are going to use Bug Stop from Wal Mart and see if that works, I appreciate your sensible reply.

They are terrible this year. On our last trip, the worst boats we saw were actually out in the bouy field.

Skip said:
Thanks Bart we are going to use Bug Stop from Wal Mart and see if that works, I appreciate your sensible reply.
Click to expand...

Let us know how it goes! Always on the lookout for better solutions!
G

Had good luck with TERRO T2302 Spider Killer as well, seems to deter them well...

I agree with the Home Defense. Very fast and effective. They're history within 10 seconds.
As I have said before the problem is spraying all the spider bodies off the decks and off anything else outside.
I may head back to AP for another search and destroy spider-run mission...in early August.
Much more pleasant for future boat buyer lookers.

Spiders are bad this year, but mud dabbers(?) are awful.

I've never seen a mud dabber on the lake....
What we need are those "spider-wasps".
They are diabolical with spiders. 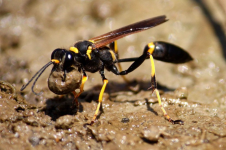 I have regularly seen mud daubers at Lake Powell. They seem to build in any nook or cranny on the houseboat. 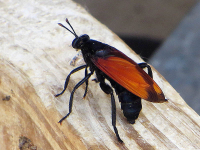 Tarantula hawks are also common at Lake Powell. In 2009, while digging anchor holes in Dungeon, there were literally dozens of them on some shrubs at water's edge that had some tiny white flowers on them. Dozens within a few feet of us but, we just ignored them making sure to not bump the bushes and everything was fine.

I do think the hawks are only after the big tarantulas so as to feed their young in a very gruesome way
Last edited: Jul 28, 2017

Circle of Life Goblin, Lay your eggs on an incapacitated foe, let them hatch and eat said foe, they then hunt for mo foes.........