Oroville Dam: What made the spillway collapse? [Discussion of Glen Canyon Dam]

Oroville Dam: What made the spillway collapse? 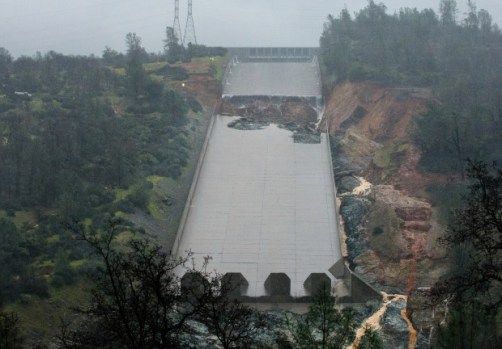 How did a giant, gaping hole tear through the massive Oroville Dam’s main concrete spillway last week, setting in motion the chain of events that could have led to one of America’s deadliest dam failures?

Dam experts around the country are focusing on a leading suspect: Tiny bubbles.

The prospect is simple, yet terrifying and has been the culprit in a number of near disasters at dams across the globe since engineers discovered it about 50 years ago. In a process called “cavitation,” water flowing fast and in large volumes can rumble over small cracks, bumps or other imperfections in concrete dam spillways as they release water during wet years. The billions of gallons of water bumping off the surface at 50 miles an hour create enormous turbulence that can form tiny water vapor bubbles that collapse with powerful force, and like jackhammers, chisel apart concrete.
“It starts with small holes, but it can break off big chunks of concrete,” said Paul Tullis, a professor emeritus of civil engineering at Utah State University and cavitation expert. “It’s like a big grinder. It causes concrete to be torn apart.”

It’s still too early to investigate the cavity on the spillway while dam operators at the nation’s tallest dam desperately drain billions of gallons of water down the damaged chute ahead of coming storms.

Water trickles down as workers inspect part of the Lake Oroville spillway failure on Wednesday, Feb. 8, 2017 in Oroville, Calif.
But the same phenomenon nearly caused the collapse of one of America’s other largest dams, Glen Canyon, a 710-foot tall behemoth on the Colorado River, in 1983.

Heavy snowmelt and rains that winter flooded the Colorado River basin, filling the 185-mile-long Lake Powell to the brim. Glen Canyon Dam — completed in 1966, just two years before the 770-foot Oroville Dam went into operation — opened its two spillways for the first time ever to lower the lake levels.

On June 6, 1983, rumbling sounds could be heard from the left spillway — which is a tunnel, different than Oroville’s 3,000-foot long concrete chute — and the dam began to shake violently. Bureau of Reclamation engineers shut off the spillway and found a series of five holes being torn into the rocks on the dam’s side.

When engineers entered the Glen Canyon Dam’s damaged spillway, they found a crater 32 feet deep and 180 feet long, and tons of concrete, reinforced metal and rock that had simply washed away. The right spillway had similar, but less severe damage.


They didn’t simply reconstruct the spillways, they introduced new technology with aeration slots — essentially ramps at vulnerable spots in the spillway to create an air pocket where water vapor could be disrupted and weakened. The physics gambit worked. In 1984, the runoff was equally as challenging, but Glen Canyon’s spillways had no problems.

Those fixes led the federal agency to retrofit two other large dams — Hoover and Blue Mesa — with aerators.

“It was a defining moment in dam design,” Bureau of Reclamation hydraulic engineer Philip Burgi told a magazine years later. “The world was watching how we were going to solve this problem.”

Similar fixes were added to the Tarbela Dam in Pakistan and Infiernillo Dam in Mexico, and now are common in new dams.

It could be months before the cause of the collapse of Oroville Dam’s spillway is known. The Federal Energy Regulatory Commission this week ordered the state Department of Water Resources to convene a panel of five dam engineering experts to oversee an investigation.

But despite the lessons from Glen Canyon, the Oroville Dam spillway apparently did not have aerators. The massive chute is 178 feet wide, as wide as 15 lanes of freeway, and just 15 inches thick in the middle. Sources at the Department of Water Resources say it hadn’t been retrofitted with aerators — likely one or two ramps, in the case of Oroville’s chute-style spillway, perhaps a foot high each, that would allow the water to flow over and reduce the risk of cavitation.

“Compared to the cost to repair that, it would be just a few million dollars,” said Tullis. “It’s not just a matter of money, it’s a matter of safety. It should have been a priority.”

When the main spillway failed, officials had to slow water releases. The lake, swollen from heavy storms, rose nearly 50 feet in five days and overtopped its emergency spillway for the first time ever, forcing the emergency evacuation of nearly 200,000 residents along the Feather River. The hillside below the emergency spillway eroded badly, leading to fears it would collapse, and send a wall of water into towns below. In recent days, dam operators have increased flows down the broken main spillway, dropping the lake level, and hoping it doesn’t further tear apart.

By Friday morning, state officials had lowered the water level at the 10-mile-long reservoir by 40 feet, especially important as three new storm systems were coming in.

“The threat level is lower. It’s much, much, much lower than what it was on Sunday,” said Bill Croyle, acting director of the State Department of Water Resources. 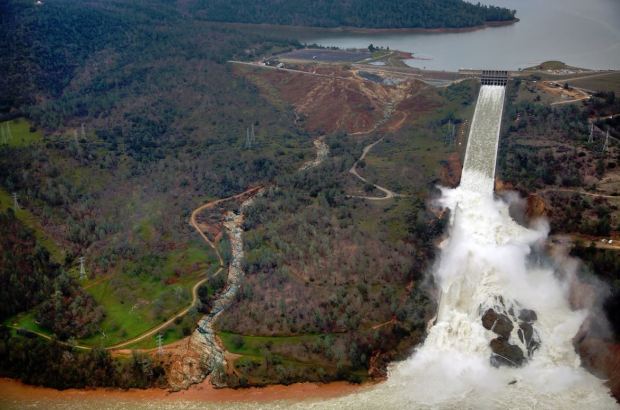 Water rages down the broken main spillway at Oroville Dam on Wednesday. Dale Kolke / California Department of Water Resources
One concern that is certain to be a focus in the investigation are cracks in the main spillway in recent years. Records from the state Division of Safety of Dams show the cracks were seen in 2009. Also, crack repairs were done last in 2013, according to Kevin Dossey, a senior civil engineer with the Department of Water Resources.

“We made repairs and everything checked out,” Dossey said last Friday at a news conference. “It looked like it would hold, and be able to pass water.”

If the concrete patches came off, or the cracks worsened, however, that could have eroded the spillway, or it could have created enough of an uneven surface to start the domino-effect of cavitaton, experts said.

“It doesn’t take a whole lot of an imperfection when water velocities are very, very high,” said James Kells, a professor of civil and geological engineering at the University of Saskatchewan.

“When I first saw photos, the first thing that came to my mind was cavitation, just because of where the damage was,” Kells said. But he also began to think uneven concrete slabs or internal erosion below the concrete could be “viable causes.”

Of concern: State officials appear not to have entered the spillway channel during the last two inspections in 2015 and 2016, according to records. “Any inspection you do from a great distance,” Kells said, “I would have to question that.”

Another theory is that the drought dried the ground under the spillway enough that it shrank, creating a void of a few inches that cracked the spillway when huge volumes of water roared down this winter.

“Soils shrink and swell,” said Nicholas Sitar, a professor of civil and environmental engineering at UC-Berkeley. “They have a way of changing volume with seasons. Anyone who has an old house where the doors open and close differently through the year has seen it.”

“They have to look at their procedures and modify them,” he said. “Clearly the spillway is going to have to be rebuilt,” a job that will cost hundreds of millions of dollars.

And the investigation won’t be easy.

“All evidence of what caused this thing,” Sitar said, “has been washed away.”

1967: Heavy snow melt in the Bighorn River basin raises the Yellowtail Dam reservoir to record levels, opening the spillway for 20 straight days. The Montana dam spillways suffers a hole the size of a semi-truck and trailer.

1977: The Karun Dam in Iran has more than 7,500 feet of concrete torn up on its concrete spillways.

1979: The Kebon Dam along the Euphrates River in Turkey suffers damage to two spillways; one had been running for 15 days, another just three.

1983: The Glen Canyon Dam takes on heavy snowmelt and rains leading to water coming perilously close to the top of the dam. Its two tunnel spillways open for the first time ever and both receive significant damage. Engineers create new aerator devices to fix the problem, a big turning point in spillway engineering.

1983: Hoover Dam, the nation’s most well-known, used its spillways in 1941 for initial testing and again in 1983 due to unanticipated high water levels, and both times a concrete elbow transition suffered cavitation damage.

Mid-1980s: Flaming Gorge Dam on the Green River in northeastern Utah and Blue Mesa Dam in Colorado suffer damage are both fixed with aeration devices.