The water temperature this morning was 65 degrees, which has spawning implications for Lake Powell fish. Some species have already spawned: walleye, largemouth bass and smallmouth bass. Walleye completed their spawn by April 1st and are now easier to catch with warming water temperatures. Bass are not done spawning since they can continue to build nests and raise broods for another two weeks. Bass may make as many as 5 separate nests and successfully hatch that many broods of fry during April and May. Spawning beds are visible in clear water and provide anglers with good targets for catching male bass that guard the nests. Please return nest-guarding fish to the lake so they can complete their spawning duties. 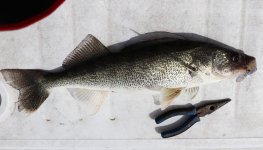 Lake Powell fish now entering the spawning season are blue gill and green sunfish. They are close cousins to bass and abide by the same rules. Male sunfish guard the nests, protect the young brood, and make more nests after the first hatchlings are released on their own recognizance. Bluegill are amazing in that they build giant nests compared to their small size. Find a nest and drop a small “ice fly” with a small piece of worm attached to catch a bright colored bluegill. Take a picture of the fish quickly as the color fades from super bright orange to more subtle colors in less than a minute. 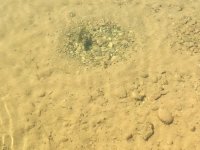 Striped bass are next to spawn. Male stripers are very patient and have been waiting for this opportunity since April. They wait each day for the females to join the spawning party, which has not happened yet. Females control the spawning event based on water temperature. Stripers do not build nests but spawn on the surface at night when water temperature increases about 8-10 degrees from early morning to late evening. Yesterday the temperature rose from 65 in the morning to 75 at dusk. Some spawning may have occurred but it is more likely that the spawn will be triggered by surface temperature rising from 70-80F. A cold front scheduled for tomorrow will delay any further spawning until the next great warming trend.

Finding a school of actively spawning stripers is an amazing fishing experience. The fish roll and boil on the surface but are still ready to eat whatever swims by. Large females join the group of 3-pound males making it possible to catch a large fish on any cast. On one occasion, we found a spawning school near Castle Rock and caught 150 fish that ranged in size from 3 pounds to 22 pounds while fishing from 9 PM until midnight.

The best way to find an actively spawning school is to head out at dusk and troll and cast to points at the mouths of coves that are only 30 feet deep. Lively males will hit your lures and mark the spot where they are waiting for the larger females to arrive. If you are lucky enough to find an actively spawning school you will remember it forever.

You can also look for spawning coves by searching along the shade line of tall east walls first thing in the morning. Striper males are hungry after a long night and will sip plankton off the surface. Their heads will poke out of the water and be visible and reminiscent of carp feeding on the surface. Try casting a fly to the slurping fish and do not be surprised to catch some very nice, healthy stripers in the process. 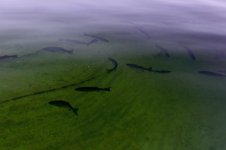 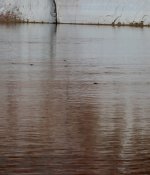 Carp used the same warming spawning trigger (65-75F ) as stripers and were seen actively spawning during the day over the length of the lake. It is possible to hear them splash in the backs of canyons as groups of 10-15 spawning carp race in pods along the surface while spawning.

The last fish to spawn are channel catfish as they wait for 80-degree water. They are the most secretive spawners as they hide their nests in small caves or crevices in the rocks along the shore. Noodling for catfish may be possible at Lake Powell during their spawning season.
Last edited: May 15, 2019