Lake Powell has risen one foot in the last week instead of a foot a day that was the case earlier in the month. Today the lake came up only an inch. The lake will rise to its highest point in July, stabilize, and then start to decline in August. The stable lake level will make it easier for anglers to find fish. Sport fish and shad will now have a sheltered home where they can reside in comfort.

Largemouth bass, crappie and bluegill will hang out in abundant brushy cover near shore. Small sunfish and shad use the same cover for protection. Smallmouth bass will be in rocky structure along the many rock falls along the lake shore and on rocky humps in open water. With lake level stabilization, these good fishing spots will be occupied for weeks making it possible to return to the spot and have a repeat performance of catching many fish. The best depth to find and catch bass remains near 20 feet.

Stripers are still searching for larger shad but looking in the wrong place. Small shad in open water are now about gone making slurps less abundant. Striper fishing has slowed down as larger stripers left the steep canyon walls where they were eating bait a month ago. Adult stripers found small shad and really increased their girth by eating as many shad as possible each day.

The next step is to find schools of larger shad hiding in brushy cover or in murky water in the northern lake. Water clarity (2 feet north and 8 feet south) is increasing each day as the inflowing water slows down and sediment drops out to the lake bottom. Striper boils will start as soon as striper schools collide with shad schools. Expect boils to begin by the first week of August from Bullfrog north to Good Hope Bay and beyond. The same result should occur in the San Juan Arm and the Escalante. The southern lake is less certain. Water clarity has been much clearer in the south and stripers really took a toll on shad numbers. Boil predictions in the southern lake are yet to be determined.

An early boil event recently occurred on the downlake side of the Halls Crossing Marina tire line. Both bass and stripers were boiling along the tires as they drove shad schools against the tires and trapped them near the surface. With small shad trapped in two directions, the feeding frenzy begins. Surface lures, plastic baits and Kastmasters worked very well when cast into the skirmish line. When the lure sank down a bit deeper, even walleye joined in on the fun. Expect more of these isolated boil events to happen this week.

The lake has been busy with boat traffic, hot weather and rising water. That is all changing. The prediction is that fishing success will improve dramatically in the next two weeks. 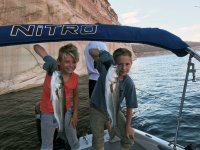