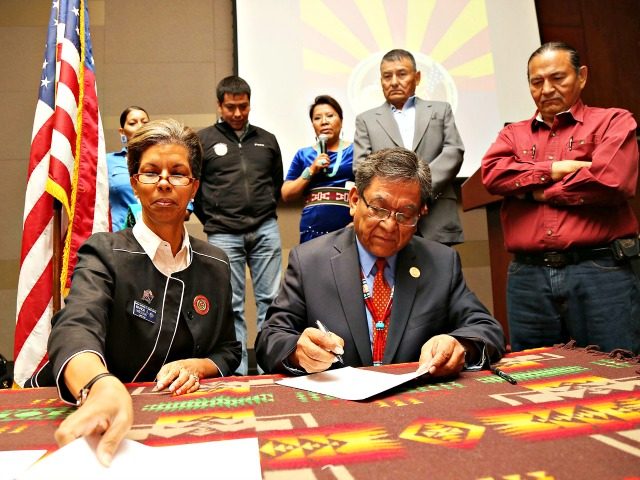 Former President Barack Obama’s efforts to shut down the coal industry in the United States have threatened the well-being of generations of coal plant and mine workers, including those of the Navajo Nation.
The Navajo Generating Station and the Kayenta Mine on Navajo land in Arizona has directly and indirectly provided 3,100 jobs and $180 million in annual income to workers and their families.

The lease agreements, royalties, and other payments are tied to the plant and mine account for approximately 20 percent of Navajo Nation annual general fund revenue, with the money used to fund schools, emergency services, infrastructure, and public parks.

And now, because regulations have driven up the cost of coal, the plant owners who lease the land have announced it will close in 2019, adding even more strain to a community that suffers from a 42 percent unemployment rate and 43 percent of its people living below the federal poverty line.

Now, the Navajo Nation hopes that President Donald Trump and the Department of the Interior Secretary Ryan Zinke will help resolve this crisis by working to keep the plant open for 10 years so that alternative income streams can be developed ahead of its closure.

“The president made a pledge to the coal industry to do whatever he can to help those workers,” a senior white house official told reporters on Monday ahead of Trump’s executive order on Tuesday to roll back much of the “climate change” policies put in place by Obama.

For decades, clean coal power has been a critical economic engine for the Navajo Nation by creating thousands of jobs and substantial revenue for our people. The expedited closure of the Navajo Generating Station, the largest clean coal fired coal plant in the western United States, would create an economic disaster that would devastate Navajo families and our entire economy.

President Trump ran on a pledge to ‘bring back coal’ and we believe that he will keep his word and stand up for coal workers on the Navajo Nation and across the United States.

We are also optimistic about working with the Trump Administration to help our people given the President’s unwavering support for coal jobs and mine workers.

Begaye traveled to Washington earlier this month to meet with federal officials and lawmakers, and he wrote in a recent oped in The Hill that he is “optimistic” about the future. He wrote:

We are … optimistic about working with the Trump Administration on this issue given the president’s unwavering support for coal jobs and mine workers. President Trump ran on a pledge to ‘bring back coal’ and provide economic opportunities for workers who have been left behind by coal’s declining fortunes.

President Trump has an excellent opportunity to deliver on this promise by using the bully pulpit to help our people keep this plant open long enough to find new, high paying jobs.

According to the federal Energy Information Administration’s Annual Energy Outlook 2016 (AEO), “Coal prices will generally increase through the year 2040. The amount that coal prices increase depends on projections for coal demand and coal mining productivity. The implementation of the U.S. Environmental Protection Agency’s Clean Power Plan is a major factor in the projections for coal demand in the AEO.”