We put in at Bullfrog on Friday around 10am, water temp was still at 55 which was encouraging knowing it was and had been windy and rainy for a few days leading up to the trip. We headed up to Good Hope, we saw blue water turning to a green hue starting just past Cedar Canyon and just as you turn the corner past the restroom and hit GH it turned again with visibility in the 5-10 foot range. As the channel narrows again heading past Castle Butte the water turned again with a more definitive mud line with only 1-2 ft clarity. The little cuts and canyons just below Scorup where we camped the water was still clearer (this seemed to be the case throughout, at every point we fished in the bay the water was clearer away from the river channel). We pitched camp and started fishing around 2pm, I caught a willing Smallmouth on a chatter bait before pushing off so we just decided to fish the coves next to our camp. The backs of the these cuts held lots of fish of all kinds, even after watching another boat fish the cove next to us as we set up camp we went in after and caught 10+ fish in the back of that same cove. We used our usual, single tail grubs in green pumpkin, shad, brown, chartreuse, and a double tail hula grub. At around 5pm we got blown and rained off the lake so we putted the few hundred yards back to our camp to wait it out.... which ended up being until the next day.

Saturday we headed south past the main mud line and stopped a few spots with minor success before heading to Ticaboo. Im not sure whether it was coincidence or area but in Ticaboo starting in early afternoon we started to pick up a few more fish at a better rate. We ended up staying in there the rest of the evening. A technique that worked well for Crappie was to drift a 1/8oz shad colored grub behind the boat as we were targeting bank. My Dad caught a dozen just doing this one technique while we kept catching fish casting towards the bank. One thing to note was that the Largemouth again seemed to be in the bigger cut boulders, also don't be afraid to cast in the exact same spots multiple times, this produced multiple fish. Another technique that worked really well in Ticaboo was to cast a drop shot at the base/face of the really huge boulders where you could work it vertically. Anytime the wind was calm enough to fish a bit slower success also increased. We saw water temps hit 57-58 that day.

Sunday fishing improved dramatically, it was day that you wait and dream about all year. The sun was out and the wind was relatively calm all day. This day we just cut to the chase and headed straight towards Ticaboo repeating the same patterns as the day before, right after lunch fishing the bank heading out of Ticaboo it really turned on, it just became fish after fish, I was having a lot of success slow swimming a Yamamoto double tail hula cinnamon with blue flake on a Owner stand up jig head size 1/4. Along with many Smallmouth we kept picking up a few Crappie, one weighing in at 1.14 it was awesome!!! After fishing pretty much every foot of bank in Ticaboo we hit a few other spots on the other side of the Bay, as the day got later a few clouds starting rolling in, my Unlce asked if it would be a good idea to try top water and if they'd bite? So i tied on a buzz bait, first cast a 3lb Largemouth exploded on it, it was the icing on the cake for a perfect day, we fished the remaining hour or so and it was on fire (mostly sallies), we were all wishing we could stay another week, or month or two. The water temp showed 59 at around 6pm or so. Sunday was a 100+ fish day, Saturday was closer to 50ish? Weather patterns even day to day play a huge part in the spring time fishing.

The next morning (today) packing up and heading back to bullfrog was cold and windy, it had once again already changed to the colder pattern. Id say if you're planning a trip up north over the next couple weeks be in mind of water clarity, and even if only a couple of the days look nice over a trip still do it, those nicer days will more than make up for a couple crappy ones and you'll still probably catch fish. Thanks again for everyone on this site and the info that they share on a myriad of topics, hopefully our reports and info help out as well. 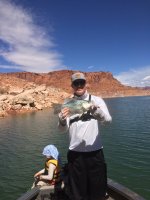 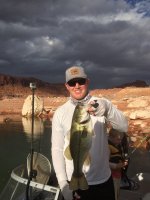 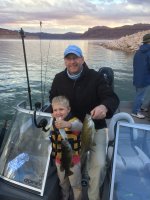 I will hold my "thanks for the report. Sounds like a great tip" comment until we see the video....
E

Thanks Preston, don't you just love the North End! Frank

Thanks for the report.

I am heading up to g.h. early Friday morning, through sunday , sounds like I should stay around castle butte and ticaboo and fish south, are you trying to fish the stained water on the edge of the clear water? what water were you having your best luck? thanks for any help.

We saw a few boats trolling the more distinct mud line in front of castle Butte, maybe one of them can chime in. We had a lot of good luck fishing the heavy green water where visibility was in the 5-10 foot range.
G

We were planning a longer stay but did get to fish a few hours wed/29th - had fuel line problems caught walleye on crawler harness until our kicker motor wouldn't run, then caught small healthy stripers trolling lc staysee at @3mph. We were in main channel near bathroom at GHB

Plan to fish about the same spot in a week and a half. Hope the fish have not seen everything. You guys obviously know how to have fun!

Great Report just what you would expect for this time of year with the weather variables. M y buddy is down ther for a few days starting today so he should have some more info soon...

We are thinking of heading up to GHB next Wednesday (the 12th) do you think it should still be fishable? We have done pretty well in the big bay just east of the floating bathroom and at what Wayne calls "Popcorn Canyon" in the past. hoping to get in a trip up there before the mudline gets too chocolatey....Seems the off channel bays take a bit longer to get so brown they are unfishable....
T

Headed out late tonight and will be launching at or before daylight tomorrow and fishing thru Saturday, maybe sunday. Planning on camping in popcorn or maybe ticaboo if there is a spot for a tent. Will be solo with my yellow lab (everyone bailed on me last minute). Will be in a camo Excel. Stop and say hi and swap intel if you see me.

We are thinking of heading up to GHB next Wednesday (the 12th) do you think it should still be fishable? We have done pretty well in the big bay just east of the floating bathroom and at what Wayne calls "Popcorn Canyon" in the past. hoping to get in a trip up there before the mudline gets too chocolatey....Seems the off channel bays take a bit longer to get so brown they are unfishable....
Click to expand...

I think you'd be cutting it pretty close but that there would still be areas in GH to fish.